9/25/18 Flint, MI – 12 Year Old With Disorders Locks Himself In Father’s Car – Police Respond To Home – Child Jumps Into Flint Police Car And Steals It – Chase At 83 MPH – Boxed In – Many Flint And Genesee Patrol Cars Damaged 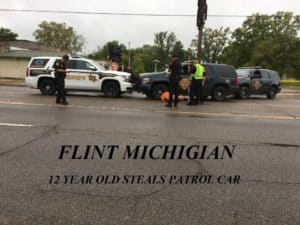 A 12-year-old jumped in a Flint police cruiser and took off on Tuesday, leading police on a chase on the city’s north side.

Flint police Chief Tim Johnson said officers were called to 3302 Milbourne Ave. for a father who was having trouble with his 12-year-old son.

Officers responded at about 8:15 a.m. on Sept. 25 and the child had locked himself inside his father’s vehicle, Johnson said.

The child may have been having some sort of mental or psychological issues, the chief said.

When the officer was talking to the father, the child jumped into the Flint police cruiser and took off, according to Johnson.

The chase ended about a mile away when another Flint police cruiser and a Genesee County Sheriff’s Office cruiser were used to box the child in at Sonny Avenue and Clio Road.

The fleeing child collided with the other two cruisers before he was eventually taken into custody.

“Nobody was hurt,” Johnson said. “I think the cruiser sustained minor damage.”

There was visible damage was to the front hood and bumper areas of the three police vehicles involved.

Johnson said he did not know how fast the child driving.

“It had to be a slow chase, I would imagine,” Johnson said, “especially with the damage being minimal to the cruisers.”

Genesee County Sheriff Robert Pickell later said his deputies involved in the chase reached speeds as high as 83 mph, but said the crash occurred at low speeds as the kid was turning around.

The 12-year-old also ran over a large orange traffic barrel just before stopping.

Dwight Richardson was reading his bible as he readied to open Afro Knot barber shop, 3610 Clio Road, just before 8 a.m.

He said all of a sudden there were dozens of police vehicles driving fast in both directions on Clio Road.

“I said ‘what in the heck is going on? They’re chasing the cop car,” Richardson said. “They rammed the vehicle. Then they pulled the person out the window. They lucky they didn’t shoot the person.”

Richardson said he never saw police draw their weapons and commended the swift action of the officers.

Clio Road was closed for more than an hour during the investigation.