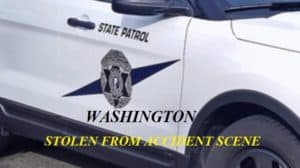 The Washington State Patrol said one of its cars was stolen early Monday after a trooper stopped a vehicle in Federal Way following a chase.

The trooper had stopped the car heading north on Interstate 5 near South 317th Street at about 2:30 a.m., Trooper Rick Johnson, a spokesman for the agency, said Monday. As the trooper walked toward the car, it sped away.

“They wait for you to get out of your car and then take off,” Johnson said. “That’s happened to me.”

The vehicle being pursued by the trooper then merged onto Highway 516, where the driver eventually lost control and rolled the vehicle.

There were four people in the vehicle. One was arrested and the other three ran, according to Johnson. Authorities believe one of the three may have stolen the trooper’s car while he was making the arrest, Johnson added.

Authorities found the patrol car near Family Fun Center on Southwest Monster Road in Tukwila, using the GPS in the laptop inside the car, Johnson said. The car will be processed for fingerprints. A K-9 search for the suspects was unsuccessful.

Johnson said the person in custody was interviewed. Authorities are reviewing the dashboard camera mounted in the trooper’s car, he said.