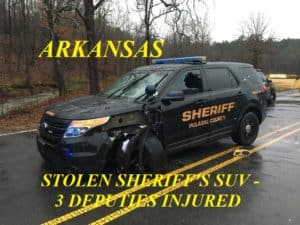 Lt. Matt Kornas said a man who lives near the Crystal Hill Road area called 911 more than 10 times around 3 p.m. Saturday afternoon but could give no coherent complaint and sounded heavily intoxicated. Kornas did not immediately identify the suspect.

Two sheriff’s deputies drove to the man’s home to ask him to stop calling 911 if he did not have an emergency, but moments after they left he began calling again, Kornas said. When they returned to the Crystal Hill address, the man had gotten into his vehicle and deputies performed a traffic stop.

During the traffic stop, the man attacked the two deputies, stole a sheriff’s office SUV and began driving erratically toward Camp Robinson, near the Military Drive and Donovan Briley Boulevard entrance, making multiple U-turns along the way, Kornas said.

When he got to the Camp Robinson entrance, the suspect rammed another sheriff’s office vehicle, bringing the stolen SUV to a stop, Kornas said. The man refused to exit the vehicle after the wreck and deputies had to break the driver’s-side window out in order to arrest him, he said.

The two deputies the man assaulted directly sustained more serious injuries and had to be hospitalized, Kornas said. He said the deputy whose car the man rammed had a superficial wound to his head but did not require medical attention. The suspect was not seriously injured but was also taken to a nearby hospital to be checked out.

Two sheriff’s office vehicles were severely damaged and had to be towed away. North Little Rock police assisted in the chase, Kornas said.