12/3/18 Canterbury, NH – Crashed Vehicle Accident – 18 Year Old Male Assaulted A Woman With A Pipe – Man Jumps Into New Hampshire State SUV And Couldn’t Put It In Drive (Tremco Save) – He Is Handcuffed – Put In Second NH State Patrol Car – Climbs Into Front And Tries To Steal 2nd Patrol Car – Couldn’t Get It Out Of Park (2nd Tremco Save) 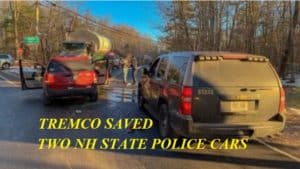 About 7:45 a.m., a trooper stopped at a crash at the intersection of Route 132 and Kimball Pond Road and began to interview the drivers involved, including 18-year-old Alan Clark, , state police said in a statement.

As the trooper spoke to him, Clark allegedly walked away from the crash, then ran to the trooper’s cruiser. He got into the driver’s seat and pressed on the gas, police said, but didn’t put the vehicle in drive.

The trooper struggled with Clark and was able to push the cruiser’s radio button with his elbow.

“It was apparent from the disjointed radio transmissions and yelling that could be heard in the background that there was a problem,” state police said.

Troopers, local police and sheriff’s deputies converged and were able to pull Clark from the cruiser and handcuff him, police said.

The officers placed him in the back of a second cruiser, but within seconds he had climbed through an open part of the partition between the cruiser’s front and back seats and had his foot on the gas pedal of the second cruiser, police said.

The troopers were able to remove Clark, who was re-handcuffed and shackled, state police said.

Clark was taken to Merrimack County jail charged with reckless operation, conduct after an accident, resisting arrest, and two counts of felony escape.

State police said they later received additional information that Clark had attacked a woman who had stopped at the crash with a pipe. He soon will face an additional assault charge, they said.

Clark is scheduled to be arraigned Monday in Merrimack County Superior Court.