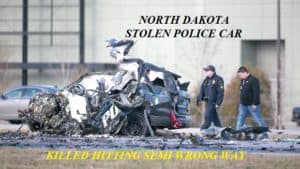 A man who witnessed a deadly car crash on Interstate 29 Monday said he watched the stolen police vehicle driving at high rates of speed just moments before veering into the path of an oncoming truck.

Isaac Dahl told the Herald he was driving home from work on Interstate 29 going northbound when he saw a police car sitting in the ditch, facing west.

“Then he tore out of the ditch like a bat out of hell. He just floored it. There was rocks and grass and debris all over the place,” Dahl said, adding he felt the driving was not typical for an officer.

A short time later Dahl said he saw a semi truck on the other side of the interstate and watched the police car head straight for the semi.

“He made a bee-line straight toward it,” Dahl said. “He just shot … straight at it and hit it.”

Dahl said he then saw debris falling all over the road.

The man who was driving the police car died in the crash.

Police made a welfare check in south Grand Forks around 5:05 p.m. Monday, Zimmel said. During the welfare check it was discovered there was an active warrant for the man’s arrest. When police attempted to arrest the man, the suspect began to fight and tried to take an officer’s weapon, according to police reports. The suspect then stole the vehicle and drove onto Interstate 29 going northbound. Soon thereafter, he veered into the southbound lane, colliding with the semi on the interstate near the Alerus Center. He died at the scene.

Zimmel said the truck driver is OK, but “shaken up.”

The crash remains under investigation. The interstate was closed for part of the evening. As of 10 p.m. police said all lanes have been reopened.

Dahl took video showing the aftermath of the crash. He said he was surprised to see the semi truck driver get out of his vehicle right after the crash.

Another video of the vehicle theft began circulating online shortly after the crash Monday evening. The video shows at least two police cars in the parking lot of the Town and Country Shopping Center on South Washington Street. In the video, a man runs into the frame and gets into the vehicle as an officer attempts to stop him. The man then drives away in the vehicle and out of the parking lot.