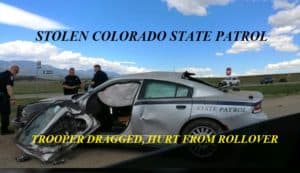 Authorities say a man stole a Colorado State Patrol squad car from a trooper during a traffic stop, dragged the trooper for an unknown distance and then led other officers on a high-speed chase until he crashed and was arrested.

Officials say the trooper’s injuries were not believed to be life-threatening after the confrontation on Interstate 25 near Pueblo Sunday.
State Patrol Cpl. Ivan Alvarado says the trooper tried to grab the car to stop the suspect from taking it. Alvarado had no information on injuries to the suspect.

Alvarado says the trooper was investigating reports of a wrong-way driver on I-25.

Neither the trooper’s nor the suspect’s name was immediately released.