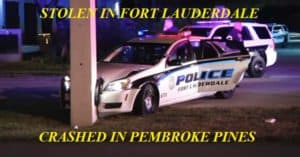 A man who stole a Fort Lauderdale police car crashed the vehicle after being spotted by police in Pembroke Pines, authorities say.

The car was taken from the officer’s home in that city, according to Fort Lauderdale police.

It was shortly after 2 a.m. Thursday when Pembroke Pines police were told that the stolen car was heading north on Palm Avenue in that city, according to Pembroke Pines Police Sgt. Viola Judon.

“Officers observed the vehicle traveling at a high rate of speed,” Judon said in a news release.

“The suspect refused to stop and in an effort to evade police capture, he struck a light pole and bailed out of the vehicle,” Judon said.

With the police car’s front end smashed into a utility pole near Pines Boulevard and Palm Avenue, the man took off running but was quickly caught.

Police identified him as Antwane Dwayne Jones, 33, of Pembroke Pines.

He was taken to a hospital to be medically checked, Judon said.

Jones will be facing charges that include theft of a marked police vehicle, fleeing and eluding and multiple traffic infractions.