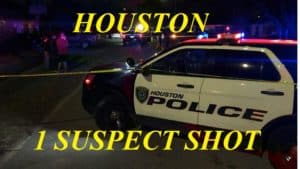 Houston Police shot a man they said was trying to run over a family with his car.

Police said the man was acting erratically during a traffic stop and tried using a Taser on him, which did not work. They shot the man in the shoulder, but he was still able to jump in the officer’s patrol car and take off.

Officers quickly caught up to the man. He is now in the hospital.

No officers were injured in the shooting.