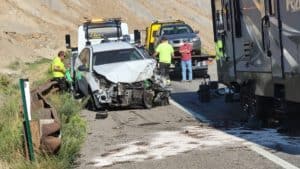 Two multiple vehicle accidents occurred Thursday afternoon, one involving a stolen De Beque Marshal’s vehicle and the other a carjacking.

According to the Mesa County Sherriff’s Office, on Thursday, Sept. 9, around 2 p.m., a De Beque Marshal’s Office Code Enforcement Vehicle was reported stolen during a traffic stop. The initial traffic stop occurred near Mile Marker 55 traveling westbound on I-70.

According to the arrest affidavit released by the MCSO, the vehicle pulled over in the traffic stop was traveling around 90 MPH and was weaving back and fourth across the rumble strips and all over the road.

A traffic stop was conducted by De Beque Marshals. According to the affidavit, the driver was identified as Jordan Cruz, 19, of Colorado Springs. There was a passenger in the car with Cruz, whose name has not been released. The passenger allegedly was a reported runaway juvenile. The passenger was then detained and the marshals were given probable cause for search of the vehicle. The affidavit states, during the search narcotics and paraphernalia was found inside the vehicle.

A chase ensued and there was a pursuit made by law enforcement. The suspect crashed the marshal’s vehicle near Beavertail Mountain Tunnel. According to Colorado State Patrol, this first accident involved three vehicles.

MCSO reports the suspect abandoned the law enforcement vehicle at the scene of the first crash and then carjacked a white Chevy Cruze that had stopped to help. The suspect continued to travel westbound on I-70, driving upwards of speeds reaching 110 MPH in a 75 MPH zone.

MCSO, CSP, De Beque Marshal’s Office, Grand Junction Police Department, Fruita Police Department, Palisade Police Department, and Colorado Parks and Wildlife all responded to this incident by shutting down I-70 exits to prevent the car from driving into town. Ultimately the driver crashed just west of the Palisade exit (Exit 42) on I-70. One passenger sustained minor injuries from this accident. CSP reports that the second accident involved two vehicles and a camper trailer.

The Mesa County Sheriff’s Office reports Cruz was booked on the following offenses:

The case is currently under investigation by the MCSO. Additional charges are still pending from the De Beque Marshal’s Office related to the initial traffic stop.