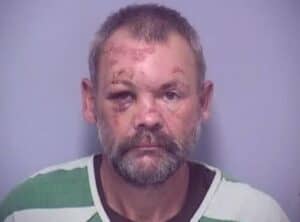 A Roanoke man is being held at the Roanoke City Jail after being charged with injuring a city police officer during a struggle and stealing a patrol car, which was crashed in Botetourt County.

Terry F. Yerkey, 42, has been charged with three felonies: assaulting a law enforcement officer, grand larceny of a motor vehicle and hit and run.

At approximately 10:45 p.m. Aug. 26, the city’s 911 center told police that a person was “acting erratically in traffic” at the intersection of Williamson Road and Hershberger Road, according to a Roanoke police news release.

An officer drove to the intersection and found Yerkey standing in the 5200 block of Williamson Road.

The officer parked her patrol car, and as she was getting out, Yerkey “rushed to her door and began assaulting her,” the news release said.

The officer and Yerkey struggled with each other, and then the officer used her department-issued taser.

“The taser had little-to-no effect on the man,” the press release said.

Yerkey then got in the driver’s seat of the officer’s car and tried to drive away. But the officer reached into the vehicle and held onto the gear shift.

During the struggle, a citizen, Tony L. Peters, pulled to the side of the road in front of the police car. He tried to help the officer, who was waiting for backup to arrive.

The officer continued to grapple with Yerkey, who leaned down and bit her arm. She let go of the gear shift in the patrol car, and Yerkey crashed the vehicle into Peters’ car.

Peters said in a post in a Roanoke community Facebook group that Yerkey hit his car door and “bent it the wrong way.”

Yerkey drove away from the scene, and he kept driving until he crashed the patrol car in the 1700 block of Lee Highway in Botetourt County.

Yerkey tried to run away, but a Roanoke police dog caught him. He was taken into custody Aug. 27 with assistance from the Virginia State Police.

Yerkey was initially taken to Carilion Roanoke Memorial Hospital, then to the Roanoke City Jail.

Both the officer he assaulted and Peters also were taken to the hospital. Neither was seriously injured.

Yerkey is scheduled to be arraigned Oct. 3, according to Virginia’s online case information system.

He was previously charged Aug. 16 with drug possession. His arraignment for that felony charge is scheduled for Sept. 13.