9/14/20 Fort Collins, CO – Burglary In Progress Call – 2 Burglars Found – 1 Escaped In Stolen Pick Up – 1 Tried To Steal A Larimer County Sheriff’s Office Patrol Car – He Was Captured In The Act Of Stealing It – Charged With Aggravated Motor Vehicle Theft, Burglary, And Attempt To Escape 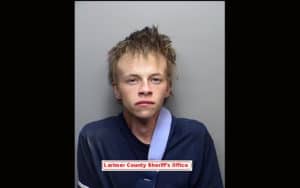 A 21-year-old man was arrested over the weekend, following a burglary that occurred in unincorporated Fort Collins.

At approximately 11 a.m. on Sunday, September 13, Larimer County Sheriff’s Office deputies were dispatched to a burglary in progress in the 2200 block of East Lincoln Avenue.

When deputies arrived on scene, they noticed three vehicles, two trailers, and two adult males. As they attempted to make contact with the two individuals, one of the men fled the scene in a stolen white pickup truck. A pursuit ensued westward on Highway 14, but was eventually called off for safety reasons. The suspect still remains at large and a warrant for his arrest is forthcoming.

Back at the East Lincoln scene, the second male suspect, now identified as Austin Bosley, attempted to also flee by stealing a marked patrol car. Deputies were able to prevent Bosley from leaving, and he was then arrested on charges of Aggravated Motor Vehicle Theft, 2nd Degree Burglary, Felony Attempt to Escape, and Resisting Arrest.

Prior to being booked into the Larimer County Jail, Bosley was taken to a local hospital to be evaluated for injuries.

Deputies located numerous items from the original burglary in the two trailers and vehicles on scene.

All charges are merely allegations and the defendant is presumed innocent until proven guilty. Anyone with information regarding this incident is asked to call Investigator Kevin Hobson at 970-498-5162.