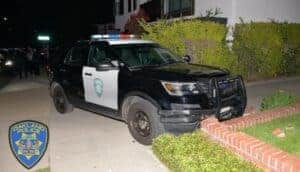 A 47-year-old man suspected of stealing an Oakland police vehicle early Thursday was arrested after an air and ground law enforcement pursuit ended with him crashing the vehicle into a residence in the Oakmore neighborhood, authorities said.

Police said an officer was outside the marked police SUV dealing with a medical emergency involving one person and a vehicle theft involving another person.

The suspect approached and was able to force his way inside the locked SUV and drove off southbound on Broadway.

Alameda County sheriff’s deputies in the area attempted to stop the driver, but the vehicle kept going onto southbound Interstate 880 with the deputies in pursuit. They were aided in the chase by a California Highway Patrol helicopter, authorities said.

The driver got off the freeway at Fruitvale Avenue and continued to flee deputies on city streets.

The SUV finally crashed into a parked vehicle and a wall at a residence in the 4200 block of Oakmore Road and the suspect was arrested by deputies.

He was to be booked at Santa Rita Jail after being evaluated at a hospital for potential injuries. No one else was reported injured.

The theft was the second of an Oakland police vehicle this year.

On May 27 about 8 p.m., a woman from Pittsburg stole a marked patrol car in the 500 block of Lake Park Avenue. She led officers, including the CHP, to Vallejo where she was arrested after the vehicle crashed into a pole and caught fire.