8/4/21 Benton County, AR – Unmarked Benton County Sheriff’s SUV Stolen – Equipped With Lights And Sirens – Citizens Are Urged To Call 911 If Pulled Over By An Unmarked Vehicle 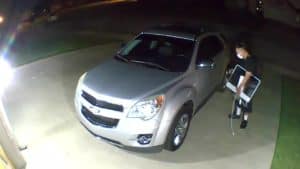 An unmarked Benton County Sheriff’s Office vehicle was stolen in the early morning hours of Monday, August 2, according to a release from the sheriff’s office on Wednesday.

The stolen vehicle is a 2012 silver Chevy Equinox with dark tinted windows and license plate 699 SSC.

The sports utility vehicle (SUV) is equipped with lights and a siren box. The lights are visor and rear emergency lights only, according to the sheriff’s office.

According to police, there were no other county-issued items or items to be concerned about in the SUV.

Until the vehicle is recovered, citizens are urged to call 911 in the event they are pulled over by an unmarked car to confirm with the dispatcher that they are, in fact, being pulled over by law enforcement.