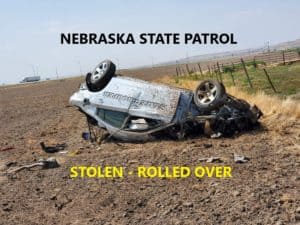 An investigation has begun for the Cheyenne County Sheriff’s Office after a situation on Aug. 30 near Sidney.

The Nebraska State Patrol (NSP) reported that a suspect stole a NSP cruiser in an attempt to avoid arrest. Shortly after the cruiser was stolen, the suspect crashed the vehicle.

The passenger Dontey Ollie, 29, of Newark California was transported to the hospital for serious injuries, following a pursuit and crash.

The driver, Zakiya Rowe, 28, of Chicago, was arrested by NSP.

Early Sunday afternoon, NSP received a report of a vehicle passing other vehicles on the shoulder on Interstate 80. NSP said a trooper located the vehicle east of Sidney that was traveling westbound on I-80 at 92 miles per hour.

Another trooper arrived on scene to assist in a probable cause search of the vehicle.

During the search, troopers found one pound of marijuana, a large sum of money and a handgun.

Following, the troopers attempted to place the two passengers under arrest.

NSP said that while a trooper attempted to place Ollie under arrest, the suspect entered the side of the cruiser, climbed over the center console and stole the vehicle.

NSP said the suspect nearly struck the trooper with the cruiser as he drove away, fleeing westbound at a high rate of speed.

NSP said one of the troopers used the other cruiser on scene to pursue the suspect.

The suspect attempted to exit I-80 and lost control of the vehicle.

The vehicle rolled several times and Ollie was ejected.

NSP said that when the trooper arrived on scene, he called for an ambulance and provided medical aid.

Ollie was transported to the Sidney Hospital. Then flown to Loveland, Colorado for further treatment of serious injuries.