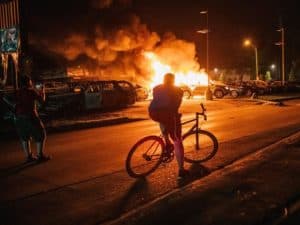 The civil unrest comes after Kenosha Police Department officers shot a Black man, Jacob Blake, during an incident Sunday. After a video of the shooting incident went viral on social media, rioters took to the streets in Kenosha County and began smashing windows and setting fires to local businesses.

In the first night of rioting, on Sunday, rioters set fire to a car dealership.

On Monday, Daily Caller reporter Jorge Ventura tweeted a video showing the extent of the fire damage at the car dealership.

Despite the guard deployment, rioting continued for a second night on Monday.

In one incident a police car was said to have been stolen by rioters. A Twitter user shared a video of the incident, “They stole a cop car in Kenosha.”

Daily Caller reporter Shelby Talcott tweeted footage of a furniture store set on fire in Kenosha. “A closer look at just one of the buildings (the local furniture store) currently up in flames in Kenosha tonight.”