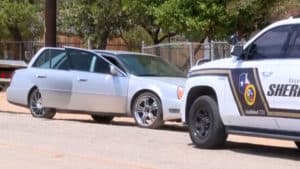 A man is in custody after attempting to steal a Bexar County Sheriff’s patrol car after leading deputies on a high-speed chase.

The incident started around noon when an unmarked deputy spotted Enrique Leyva, 30, who is wanted on a felony Theft of Vehicle charge and called a nearby patrol car for help.

Deputies tried to take Leyva into custody, but he hopped into a car and raced off, leading deputies on high-speed chase for about four miles.

Leyva ditched the car on the access road of Interstate 35 South. At one point, he tried to get away from the deputies in pursuit by jumping in a patrol car, but it was locked.

Deputies took Leyva into custody. He is expected to face new charges of felony Evading Arrest and possible charges in attempting to steal the patrol car.

Nobody was injured during the chase.