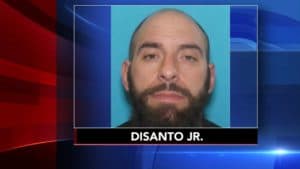 A man wanted on attempted murder charges fled police in Pennsylvania, stole a police vehicle, drove to New Jersey, and was shot and wounded during a gun battle with officers, authorities said Tuesday.

The manhunt for 41-year-old Arthur Henry Disanto Jr. lasted several hours on Monday night and came to an end just before 12 a.m. when a gun battle ensued between Disanto Jr. and officers in Washington Township.

Court records show he has a long criminal history dating back to the 1990s. DiSanto Jr. was wanted by both the FBI and Pennsylvania State Police for allegedly shooting a woman in her Media home on July 3. He’s been charged with criminal attempted homicide and other counts for that incident.

Authorities say Disanto Jr. was shot during the Monday arrest. He was transported to an area hospital where he’s expected to survive.

A police officer was also shot and suffered non-life-threatening injuries while trying to apprehend the man, according to the Gloucester County Prosecutor’s Office. Further details on the shooting and what department the officer belonged to were not immediately available.

The incident started around 7 p.m. when Pennsylvania troopers attempted to stop a motorcycle driven by Disanto on Monday night in Marple, authorities said. He was later spotted by a plainclothes officer in Folcroft who was driving an unmarked police SUV.

The officer caught up with the motorcycle on the 8400 block of Lindbergh Boulevard in Southwest Philadelphia. Disanto lay the bike down and reached for a gun in his waistband as the officer got out of his vehicle, authorities said.

The officer retreated behind the SUV, and Disanto got in and drove off, authorities said. The officer shot out the windows as Disanto left. It’s unclear whether Disanto fired any shots then, and the officer was not injured.

Authorities tracked the SUV to Deptford Township, New Jersey, but Disanto had already exited and taken SWAT gear that had been inside, including a bulletproof vest and helmet, authorities said.

Some of the SUV’s windows were blown out due to gunfire from the initial shooting in Philadelphia.

Only Action News was there as officers converged on the home along Barnsboro Road and took Disanto into custody.

Disanto Jr. has been charged with armed carjacking in connection with the stolen police vehicle. The Pennsylvania State Police file charges in Delaware County for fleeing and eluding.

The Gloucester County Prosecutor’s Office is also expected to file charges against Disanto.