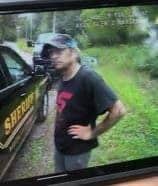 According to a media release from Morgan County Sheriff K.C. Bohrer, a Morgan County and Frederick County, Virginia, suspect fled from police in a sergeant’s cruiser.

Information was requested for the man’s arrest, who last fled on foot. He was later arrested without incident around 7:50 p.m.

At approximately 12:30 p.m. Thursday, Sgt. Lemon was dispatched to a reported theft on Spielman Road. On scene, he met with the two complainants in a Ford truck.

During the course of his investigation, he learned both complainants were wanted from Frederick County, Virginia, on felony drug charges and placed them under arrest.

They were handcuffed and placed in his patrol SUV, with the male suspect in front of the cruiser and the female in the rear. The female subject was removed from the rear of the cruiser to assist Sgt. Lemon with the suspects’ vehicle.

A broadcast was put out on the stolen police vehicle to area units in the Eastern Panhandle and also Virginia and Maryland. Approximately 20 minutes after the suspect fled in the patrol SUV, Sgt. Nazelrod found the stolen vehicle on Eppinger Road.

The fleeing felon was not in the vehicle.

Various vehicle, foot and K9 searches took place in the entire region, but the fleeing felon was not located at that time.

The male was identified as Foster Crouse Miller, Jr., 42,  who goes by “Junior.” He is described as a white male with brown hair and blue eyes

Miller is wanted as a fugitive from justice in Frederick County, Virginia, and charges are forthcoming for grand larceny of police SUV and felony escape.

The female suspect is identified as Victoria C. White, 26, who was charged as a fugitive from justice and is currently incarcerated in the Eastern Regional Jail with no bond.