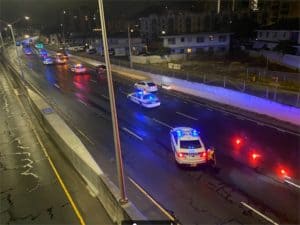 Honolulu Police (HPD) are investigating an auto-theft case in Makiki.

HPD says an officer stopped at the Lunalilo off-ramp to assist what looked like an accident Tuesday morning (1:57 a.m.). The driver and other occupants in the vehicle got out of the car and started to run away. The white Sedan that the suspect was driving had been listed as stolen.

The driver and police officer got into an altercation, the suspect allegedly then overpowered the officer, took the marked police car and fled on the H-1 Freeway westbound. The suspect then crashed at the Waikele off-ramp (2:07 a.m.).

No officers were hurt, and the suspect was later taken to the hospital.