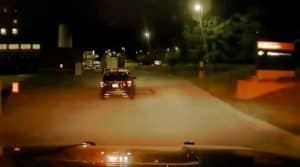 A man jumped into a Dearborn police vehicle overnight and sped off while officers were investigating a large parking lot fight, officials said.

Dearborn police were called to the area of Outer Drive and Pelham Street around 2 a.m. Friday (Aug. 13). While they were investigating, a man stole a parked patrol vehicle, according to authorities.

Officers pursued the stolen vehicle through the streets to Beaumont Hospital, where the driver hit an empty, parked security vehicle, police said.

The man was treated for minor injuries from the crash and taken into custody, according to officials. Charges are pending.

“Clearly, this outcome is not one that is anticipated from a well-trained workforce,” Dearborn police Chief Ronald Haddad said. “It is another reminder that I do not exist in a perfect world. An investigation into this matter in its entirety is ongoing.”