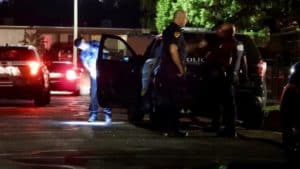 A suspect who sat handcuffed in the back of a Salt Lake City cop car pulled a bit of a “Harry Houdini” Thursday evening — managing to slip his handcuffs before stealing the police cruiser he was being held in.

Salt Lake City Police Department Lt. Mike Hatch told Gephardt Daily the great escape happened about 8:22 p.m., when the suspect, who had been taken into custody for reasons yet unknown, was placed in the rear of the squad car with his hands cuffed behind his back near a market at 996 S. Redwood Rd.

According to Hatch, the officer had stepped away from the cruiser with the motor running and a rear window partially opened. While he was gone, Hatch said the suspect managed to get the handcuffs in front him before reaching through the cruiser’s window and opening the door from outside.

He then jumped behind the wheel of the cruiser and disappeared into the night.

About five minutes later police found their car abandoned in the area of 740 S. 1450 West. Officers were relieved to learn a police long rifle was still inside the cruiser.

A perimeter was set up and cops searched house-to house and yard-to-yard before finding the suspect hiding inside a motor home.

He was taken into custody without incident.