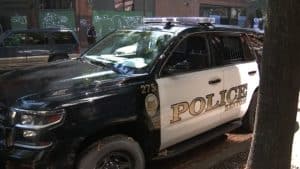 Officials said as the officers were walking back to their patrol cars, a witness called 911 to report that the same man officers had approached had reached through an open window of one of the parked patrol vehicles, unlocked the door and drove away. The car was running at the time.

The patrol car was found by Seattle police in the 80 block of South Washington, 30 minutes after being taken.

Police said they found the suspect a couple of blocks away from where he ditched the car and arrested him for investigation of felony theft.

Nothing was taken from the patrol car, and the suspect did not damage the car, police said.

The Washington State Patrol is helping police with the investigation.