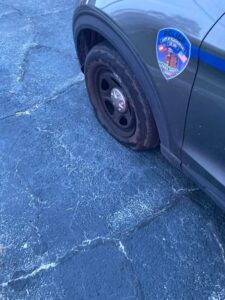 The Charlton County Sheriff’s Office reported that it successfully and safely stopped a patrol car thief after a high-speed chase on U.S.-1.

According to a Facebook post by Sheriff Robert Phillips, the sheriff’s office received a call Tuesday night about a stolen Blackshear Police Department patrol car being spotted near Waycross, Georgia. The caller reported that there was a AR-15 weapon in the vehicle.

The suspect drove south on US-1 at high speed into Charlton County, and upon entry, deputies from the Folkston Police Department gave chase and worked to determine the safest way to end the pursuit.

The suspect then moved over into the northbound lanes, where Chief Deputy Bill Lee forced him into a Brickhouse Restaurant parking lot. The suspect was taken into custody without incident and turned over to Chief Chris Wright from Blackshear PD.