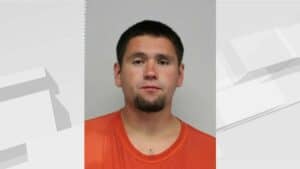 A 27-year-old man is facing several charges after breaking the side window of a Bagley police car, getting in and driving away with it.

Shane Teigland, of Shevlin, Minn., is charged with felony theft of a firearm, first-degree DUI, fleeing a police officer and theft of a vehicle.

Court documents say shortly before 1 a.m. on July 31, Teigland led officers on a pursuit after stealing the vehicle.

Teigland was arrested in Mahnomen after an unsuccessful attempt at using spike strips to stop him, as well as two failed PIT maneuvers. Court documents say the third PIT is what finally lead the pursuit to an end. The pursuit lasted approximately 25 miles, and varied in speed from 45 to 85 mph, documents state.

Officials state the stolen squad car suffered significant damage in the accident, and state additional charges will be filed once the City of Bagley receives a damage estimate.