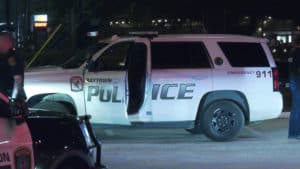 Houston police were notified of an area where the woman may have gone, and officers soon spotted the stolen police unit, which had its emergency lights on.

Police chased the suspect, at times reaching speeds up to 100 mph. During the pursuit, the woman used the police radio to talk to dispatchers.

KHOU 11’s Adam Bennett reported that police considered using the PIT maneuver to spin the SUV to a stop, but at times the suspect was not going fast enough for the maneuver to work.

The woman made her way from southeast Houston to the north side before finally stopping along I-45 North near Sawdust. She was then taken into custody without further incident.

Police said the woman was originally was taken to the hospital by ambulance for being under the influence of drugs. There’s no word on what charges she may face, and her name has not been released.