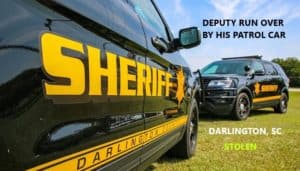 A deputy in South Carolina was run over by his own patrol car after it was stolen by a wanted suspect, according to the sheriff’s office.

The Darlington County Sheriff’s Office is searching for a man they say assaulted a deputy who was investigating a burglary on Friday evening. After assaulting the deputy, the suspect “stole the deputy’s patrol vehicle and ran over the deputy with the patrol vehicle,” the sheriff’s office reported.

The deputy was taken to an area hospital and has since been released.

Deputies have located the stolen vehicle and are still searching for the suspect.