7/13/22 Jackson, MS – Suspect Shot After Trying To Steal Unmarked Police Vehicle While The Officer Was In It – Officer And Suspect Exchanged Gun Fire 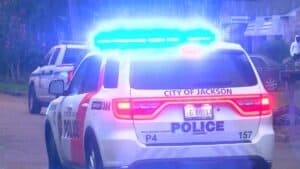 A suspect was shot after attempting to steal an unmarked police vehicle around Jacksonian Plaza Friday.

On July 8, Jackson Police arrested Antrez Davis and James Thompson and charged them with aggravated assault on a law enforcement officer, attempted auto burglary, and shooting into an occupied vehicle.

According to police, Davis and Thompson pulled up to the officer’s unmarked Dodge Charger during a burglary suppression operation at and around Jacksonian Plaza.

One of the suspects got out of the vehicle and began pulling on the door of the unmarked car.

“Upon opening the vehicle door, the officer announced himself as a JPD officer. At this time, Antrez Davis began firing shots at the JPD officer,” the release states.

Thompson is currently being held at the Hinds County Detention Center in Raymond. No photo of the suspect was available Wednesday afternoon.

It was unclear if Davis was still in the hospital receiving treatment. His condition also was unknown.

The officer’s name is being withheld as the investigation continues. The case is being looked into by the Mississippi Bureau of Investigation and JPD.