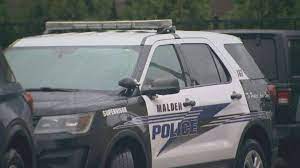 A woman is facing criminal charges after she stole a Malden police cruiser and led troopers on a chase through Boston late Tuesday night, authorities said.

Renelle Sonia, 38, of Malden, was arraigned Wednesday in the Roxbury Division of Boston Municipal Court on charges including receiving a stolen motor vehicle, negligent operation, unlicensed operation, and failure to stop for police.

The stolen cruiser was spotted driving erratically on the Zakim Bridge shortly before midnight after Malden police issued a BOLO, according to Massachusetts State Police. A trooper on Interstate 93 south near Massachusetts Avenue then attempted to conduct a traffic stop but Sonia allegedly refused to stop.

Video shared by MassDOT showed several troopers speeding through the O’Neill Tunnel in pursuit of the cruiser.

Sonia later exited the highway at Columbia Road, proceeded to Massachusetts Avenue, and stopped outside Victoria’s Diner, according to state police. She was then taken into custody.

Investigators noted that Sonia swiped the cruiser, which was parked near the front door of Malden police headquarters, while officers attended to another matter involving a victim and a suspect.

There were no injuries reported and the cruiser was not damaged.

A judge ordered Sonia to undergo an evaluation at Tewksbury Hospital. She is due back in court on June 27.