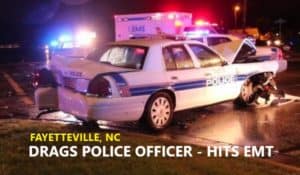 A man has been hospitalized and will be charged after stealing a Fayetteville police car, dragging an officer and crashing multiple times Sunday morning.

It started just before 8 a.m. when officers arrived in the 2500 block of Fordham Drive for a medical call.

A man at the scene was non-cooperative and eventually got into the driver’s seat of a Fayetteville police vehicle. When officers tried to remove the man, he started to drive and drag an officer. The officer was taken to Cape Fear Valley Medical Center with non-life-threatening injuries.

After fleeing in the car, the driver collided with several other vehicles. North Carolina State Highway Patrol took over the pursuit when it left Cumberland County.

The pursuit ended when the suspect vehicle crashed in a ditch in Autryville. The man was taken to Cape Fear Valley Medical Center for treatment. He will face numerous charges once released.

The specific charges will be released in another update along with the man’s identity.

Detectives are asking for anyone with security camera footage in the area of Fordham Drive, Dartmouth Drive and Purdue Drive area, to please call 911 so the footage can be reviewed.

Anyone with information regarding this theft investigation and resulting vehicle crash investigations is asked to contact Detective D. Gousby with the Fayetteville Police Department at (910) 322-1084 or Fayetteville / Cumberland County Crimestoppers at (910) 483-TIPS (8477). Crimestoppers information can also be submitted electronically, by visiting http://fay-nccrimestoppers.org and completing the anonymous online tip sheet, or by downloading the FREE “P3 Tips” app available for Apple devices in the Apple App Store and available for Android devices in Google Play.