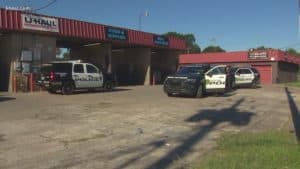 A 39-year-old man was arrested after police say he stole a patrol unit and led officers on an 11-minute chase Thursday morning.

This happened just before 7:30 a.m. in southwest Houston.

Houston police said officers were called to a home, and the suspect’s mother told them he suffers from mental health issues and was having an episode.

When police arrived at the scene, officers said the suspect ran out the back of the house hopped in the patrol unit and took off.

Police said he turned on the lights and sirens and was on the radio. At one point, police said he pulled into an empty parking lot and did donuts before speeding off.

The chase ended with police boxing him in at a car wash. They had busted the window and used a Taser on him twice to calm him down.

Then he was taken into custody with no issues. He’s facing charges of auto theft and evading arrests.