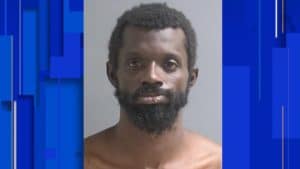 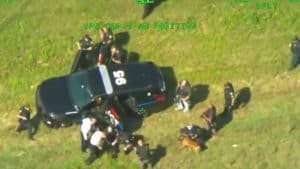 A 33-year-old man accused of stealing two police cruisers was taken into custody with the help of the Volusia County sheriff on Thursday, according to the sheriff’s office.

temporarily shut down in the Oak Hill area due to a pursuit, which began after

Cummings was arrested after a 60-mile chase, officials said.

Cocoa police said around 3:46 p.m. officers responded to a disturbance at a motel on the 4000 block of State Road 520. Police said when officers were talking to the man, he took off and jumped into one of the patrol vehicles and drove onto I-95.

Video from a helicopter released by the Volusia County Sheriff’s Office showed the man in a stolen police cruiser that crashed into the woods when an officer performed a PIT maneuver.

Officers are heard on the video telling dispatchers to close I-95 and the northbound on and off-ramps.

Once the man crashed into the woods, almost a dozen officers swarmed the vehicle. Deputies said Cummings dispersed pepper spray, exited the vehicle and ran toward another Cocoa police cruiser, which was unlocked with the keys in the ignition, an affidavit said.

Officials said an officer used his Taser that hit Cummings on his left side, but it was ineffective.

Video then showed Cummings driving away in the northbound lanes, according to authorities.

Officers in a helicopter continued to follow the man. Later, investigators in a median threw stop sticks in front of the stolen cruiser. The sheriff’s office said three tires deflated, causing the car to slow down and come to a stop.

The cruiser started to smoke and the driver eventually stopped the car in a grass median.

Cummings surrendered by exiting the cruiser and lying on the ground, sheriff’s officials said.

Several officers, including Volusia Sheriff Mike Chitwood, swarmed the man and took him into custody.

No officers were injured in the incident.