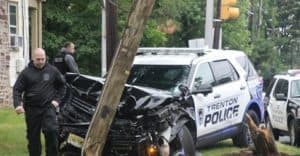 A Trenton Police officer exited her vehicle while running, a female identified as 30-year-old Cherrelle Cooper then jumped into the Police officer’s car and took off down Route 29 towards Hopewell Township according to Detective Sergeant Cynthia Hargis of Trenton Police. The officer reported her car stolen at 5:41 Pm Saturday. The female suspect crashed in Hopewell Township at the intersection of Bear Tavern Road and Washington Crossing road into a utility pole in front of the New Jersey State Park Police station. The female was taken into police custody and transported to a hospital for injuries sustained. Detective Sergeant Cynthia Hargis says charges are pending as of now but will be filed.