5/26/21 Thompkinsville, KY – Metro Nashville PD Contacted Thompkinsville PD That A Man Is Suspected Of Stealing A Police Interceptor From Walton County, Florida And May Have It – A Home Visit Found 3 Stolen Police Cars And Equipment – Arrested 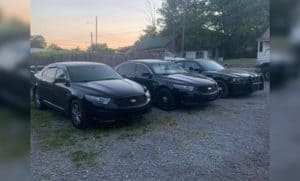 A Tompkinsville man was arrested last Thursday in connection with a stolen Ford Taurus Police Interceptor.

According to Tompkinsville Police Department, an officer was contacted by a detective with the Metro Nashville Police Department about the theft. Chandler James Moon was suspected to have stolen and possibly still be in possession of the car. Police said after an investigation was conducted at Moon’s home, it was determined that the Taurus was stolen out of Walton County, Florida.

According to the report, a search warrant was obtained for Moon’s residence and several items were seized including several items consistent with police equipment which is believed to have been used for the impersonation or benefit of a peace officer, emergency lights, sirens, speed radars, several duty gear items, two-way police radios, agency-specific patches, jackets, and identification consistent with impersonation. Also found were several license plates from numerous states in which one of the plates had been confirmed stolen by Metro Nashville Police.

Authorities said they also seized two more old police cars, a Dodge Charger and a different Ford Taurus. A white utility trailer was also on the property and was seized. Police said the trailer also contained several police equipment items within and had an altered VIN plate, preventing confirmation as to whether it had been stolen or not.