5/26/21 Jenkins, KY – Convicted Felon Arrested For Hand Grenade And Other Weapons In His Truck – In Handcuffs He Steals Marked Cruiser After Kicking Out Cage – Cruiser Later Recovered – Abandoned At Gas Station – Escaped 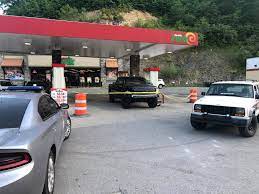 Kentucky State Police Hazardous Devices Investigators have retrieved what they believe to be an active grenade from the truck of Steven Tackett.

Police tell us Tackett was detained at the Double Kwik in Jenkins after guns, ammunition, and a “small explosive device” were found in the man’s truck before he managed to get away with the squad car.

“The dude was handcuffed behind his back, in the backseat of my cruiser, gate shut. So I don’t know if he kicked the cage out, got his arms in front of him and somehow weaseled through there or what,” said Police Chief Hunter Holbrook. “But we heard the horn honk and the cruiser takes off. Allegedly towards Pike County.”

According to Holbrook, the situation was a first for the department.

“The grenade thing was crazy from the get-go, and then my cruiser drove down the road,” Holbrook said.

KSP investigators were able to clear the area around 10:00 p.m. and say the grenade in the truck did, in fact, have the potential to cause an explosion.

Just before 11 p.m. Wednesday, officers found the cruiser abandoned and out of gas in Pike County.

The Letcher County Sheriff’s Office has identified Steven Tackett of Brushy Fork as a suspect in the cruiser theft. Tackett is a convicted felon and is considered armed and dangerous. Officials ask that you call 911 immediately if you spot Tackett.