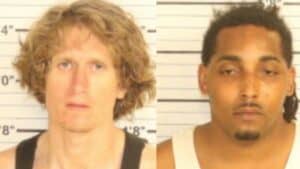 Two people were arrested after allegedly burglarizing a home before one of them stole a Memphis Police squad car.

The incident happened May 19, around 5:45 p.m., when Memphis Police Department (MPD) officers received a burglary call in the 5300 block of Lyford.

Officers were told two men in a white Ford Taurus backed into a driveway, broke into a home, and stole items, according to an affidavit.

The suspects then drove by the officers while they were at the scene.

Police initiated a traffic stop in the 4800 block of Hummingbird, where both suspects fled on foot, officials said.

The passenger, identified as McKenzie Madison, was quickly taken into custody.

The driver, identified as Ronald Dandridge, circled back while officers were chasing him and jumped into an MPD squad car, a 2021 Dodge Charger, according to the affidavit.

Dandridge drove off, but the car was located in the 1000 block of Greer.

Dandridge was taken into custody without incident, and the police car was not damaged, records show.

Madison, 34, was charged with Aggravated Burglary, Evading Arrest. To Wit: Foot Pursuit, and Theft of Property.

This is an ongoing investigation, police said.