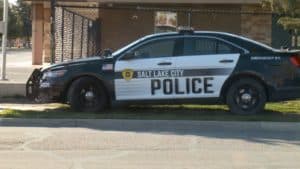 A man was arrested Tuesday for allegedly stealing a Salt Lake City police officer’s patrol car and taking it for an unauthorized drive.

While police were investigating another incident earlier in the morning, Joseph Schmeichel, 38, went to the marked patrol car and got inside. Once in the vehicle, which was a K-9 patrol car with the K-9 still in the back, Schmeichel drove off.

After circling the block, Schmeichel was apprehended. While in custody, Schmeichel told officers he knew he was not allowed to take the car.

Schmeichel was arrested and booked for theft and interfering with a police service animal or handler.