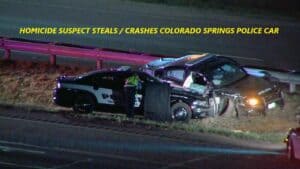 A man who police say was involved in a homicide, attempted carjacking and assault on a police officer was arrested following a pursuit in a stolen patrol car that ended in a crash on Interstate 25 in Colorado Springs Friday.

The Friday night crime spree began just before 10 p.m. when the knife-wielding suspect allegedly attempted to carjack a vehicle in the 200 block of E. Arvada Street, police said.

After the failed carjacking, the unidentified suspect “made his way into an apartment where a homicide occurred,” the department wrote in a tweet. Details surrounding this incident were not released. The department’s violent crime section is investigating the homicide.

Shortly after, an officer arrived on scene and confronted the suspect, who police allege assaulted the officer. During the confrontation, the officer shot at the suspect, but the suspect was able to get away in the officer’s marked patrol vehicle, police said.

The suspect then led police on a chase in the stolen patrol car. It came to an end after he crashed into multiple vehicles on Interstate 25 and Academy Boulevard, disabling the stolen patrol car, according to the department. It’s unclear if anyone else was injured in the crash.

The suspect, who has yet to be identified, was taken into custody and transported to a hospital for treatment of his injuries.

The officer involved in the confrontation with the suspect sustained minor injuries. The El Paso County Sheriff’s Office is investigating the officer’s use of their duty weapon at least one time at the suspect.