4/29/21 Tulsa, OK – Man Questioned For An Assault Crime – Made Threats – Man Jumped Into And Tried To Steal A Police Car – The Lieutenant Stopped Him And Was Bitten In The Face – Captured 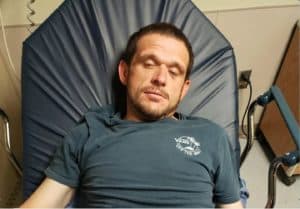 A man is in jail accused of trying to steal a police car and biting the Tulsa officer who was stopping him.

Tulsa police say the call came in Tuesday morning about an assault at the bus station downtown, and they quickly identified the man accused in the assault as Jonathan Noe.

Police say one of their lieutenants tried to stop Noe and question him, but Noe refused. Noe then started making threats at the lieutenant, who then sprayed his pepper spray at Noe.

Police say Noe charged toward a police car and tried to open the door. The lieutenant tried to defend the police unit, and Noe bit him in the face.

The lieutenant and Noe fought on the ground until more officers arrived helping to take him into custody.

Police say they searched Noe’s bag and found $100,000 in stolen checks made out to American Residential Group, and a computer, MiFi, computer cables and a webcam belonging to the same group.

The officer was checked out at the scene and is expected to be OK.

The victim in the original assault Noe was allegedly involved in went to the hospital with a swollen eye and a cut that required stitches. He said Noe punched him several times.