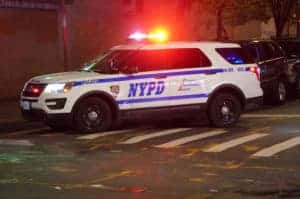 Kassie Moses, 28, is accused of swiping the patrol car belonging to the 25th Precinct while it was parked at the corner of East 132nd Street and Madison Avenue at about 11:15 p.m., sources said.

The officer who had been using the car was responding to a foot pursuit in the area. He inadvertently dropped the car’s keys when he got out of the vehicle, sources said.

Moses, of Harlem, found the keys and took the car for a drive, striking another NYPD vehicle driven by a captain, before getting caught in traffic on the Madison Avenue Bridge, sources said.

Moses, who has 12 prior arrests, was charged with grand larceny auto, criminal possession of stolen property and reckless endangerment.

Nobody was injured during the incident, sources said.