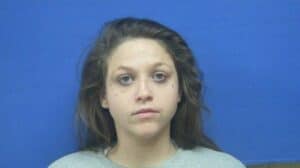 A White Bluff woman was taken into custody early Tuesday morning after stealing a patrol vehicle, leading deputies on a pursuit and crashing into another patrol vehicle in Dickson County.

The incident occurred just after 1 a.m. on Water Street in Dickson County. Jennifer Cunningham, 27, was suspected of driving under the influence but refused to pull over until her vehicle became disabled, according to the Dickson County Sheriff’s Office. She reportedly resisted during the arrest and was stunned by a deputy.

The sheriff’s office reported after being placed in handcuffs in the back seat of a patrol car, Cunningham managed to get her hands in front of her and climbed through a small window partition and took control of the vehicle.

While attempting to leave the scene, she struck another patrol car, causing damage to both vehicles, according to the sheriff’s office. The Tennessee Highway Patrol reported Cunningham led law enforcement officers on a six-mile pursuit before she was taken into custody.

The THP responded to the crash scene and is seeking an additional driving under the influence charge for driving the patrol car.

Cunningham’s bond was set at $166,000 and an her initial court appearance is scheduled for May 17, .