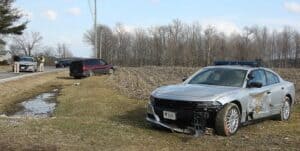 Jeremy Reynolds was placed behind bars in the Richland County Jail the day after allegedly stealing a car, a police cruiser and a minivan, leading police through two counties  and being shot by officers.

The man was listed as “actively incarcerated” Monday afternoon, according to Capt. Jim Sweat of the Richland County Sheriff’s Office.

Reynolds, 31, of Mount Gilead, was arraigned Monday morning on charges of theft and failure to comply with a police order, according to Mansfield Municipal Court records.

Reynolds had been taken Sunday to a local hospital after he was shot twice Sunday afternoon, Sgt. Ray Santiago of the Ohio Highway Patrol said during a Sunday evening news conference at the patrol’s Richland post.

Traffic stop turns into a pursuit

The series of events began at 1:09 p.m. Sunday when troopers started chasing a suspected stolen vehicle, according to a news release from Sgt. Ryan Purpura of the public affairs unit of the Ohio Highway Patrol.

Reynolds had been in the westbound rest area on U.S. 30 near Interstate 71 before pulling out and leading troopers toward Reed Road.

That is where troopers attempted to pull the vehicle over. Instead, Reynolds reportedly began driving recklessly with a woman passenger aboard.

“The vehicle failed to stop and a pursuit ensued,” the news release states.

Reynolds continued his attempted getaway eastbound on U.S. 30, then exited at Ohio 309 and “drove through numerous roads where he struck multiple vehicles.”

“The damage from those crashes caused the fleeing vehicle to become disabled in the yard of a residence on Millsboro Road between Lexington-Springmill Road and Lexington-Ontario Road,” Purpura wrote.

The report says that after the vehicle was disabled, Reynolds refused to comply with verbal commands to exit his vehicle from troopers, Richland County Sheriff’s Office deputies, and Ontario Police Department officers.

Troopers reported that smoke was coming from the vehicle, which eventually caught fire. Reynolds then exited the vehicle with the passenger and moved westbound toward an Ohio Highway Patrol cruiser when shots were fired by law enforcement.

Law enforcement returned fire with the suspect being shot twice by officers from the Richland County Sheriff’s Office and Ontario Police Department, Santiago during the news conference.

“Reynolds and the female passenger then fled in the patrol car that already had its overhead emergency lights activated,” Purpura wrote.

Reynolds and his passenger went east on Millsboro Road and then took other connecting roads before finally driving back onto U.S. 30 east.

Reynolds stopped the patrol car on the shoulder of U.S. 30 near Township Road 1255, according to Purpura.

A minivan had pulled over believing the stolen cruiser to be a legitimate emergency vehicle, Santiago said.

Reynolds then fled the cruiser and forcibly removed the driver of the minivan before speeding off and leaving his female passenger stranded on U.S. 30.

The pursuit continued on Ohio 511 southbound, Santiago said. Troopers were able to crash into the suspect’s vehicle and remove him from the minivan at Ohio 511 and County Road 2104 in Ashland County.

That’s where Reynolds was finally taken into custody.

He was taken to a local hospital with non-life threatening injuries, Santiago said.

The minivan occupants had minor injuries, he said.

The Ohio Bureau of Criminal Investigation will investigate the shooting.