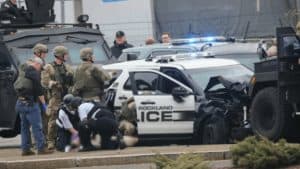 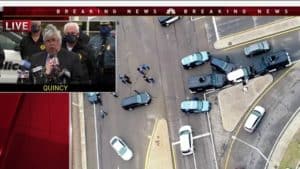 An armed robbery suspect who barricaded himself inside a Rockland, Massachusetts, police cruiser Friday morning was fatally shot at the end of a standoff, officials said. He appeared to be exiting the vehicle with a police rifle.

Over about three hours, the man robbed a 7-Eleven, evaded an officer who’d cornered him on foot, stole an officer’s police cruiser, led a chase through several towns south of Boston and engaged in standoffs with police twice, officials said.

The suspected robber was identified Friday evening as Eric M. Leach, a 36-year-old who’s lived in Brockton and Winthrop. Police in Rockland, where the incident began, said he had a criminal record.

Officers tried negotiating with the Leach while he was barricaded inside the vehicle, a Massachusetts State Police official said. But Norfolk County District Attorney Michael Morrisey said that he obtained a police rifle from inside the stolen Rockland cruiser and was holding it when he got out of the vehicle during the second standoff in Quincy.

“The police did become aware that he had gained possession of a patrol rifle. That was quite evident to them during the negotiations and when he attempted to exit the vehicle, he had the weapon in hand,” Morrisey said.

Leach was given first aid after being shot and rushed to Boston Medical Center, but he was pronounced dead about 10:15 a.m., Morrisey said.

The investigation into the hourslong incident was in its early stages, Morrisey stressed at a news conference Friday afternoon.

Rockland Police Chief John Llewellyn, who didn’t identify the man when he spoke, but said he had a criminal record: “There was a rather famous incident not that long ago. He does have an extensive criminal record. He’s done time in jail.”

Leach tried to get into at least two people’s homes before police spotted him, according to 911 calls to Rockland police, then an officer spotted him and cornered him on foot, Llewellyn said. Held at gunpoint, the man defied orders to surrender, challenged the officer to shoot him and then ran around a house — where he found an officer’s unlocked police cruiser.

Over the course of the next roughly three hours, he worked a semiautomatic rifle free from a secure mount.

“He was able to bend the metal brackets and work that rifle out because he had so much time,” Llewellyn said.

No other serious injuries have been reported, though at least two police officers were hurt in crashes during the chase, officials said.

How the Incident Unfolded

The incident began about 7 a.m. Friday, when the alleged robber, armed with what was believed to be a handgun, stole more than $300 from a Rockland 7-Eleven, according to Morrisey.

Surveillance video from the store shows a man in a black hoodie pointing a gun at the cashiers; both are okay, police said. The handgun he used in the store hadn’t been recovered by Friday afternoon.

The alleged robber fled the store and ended up in a Rockland neighborhood nearby. An officer cornered him at gunpoint, but ended up using his Taser after the man advanced toward the gun, asking the officer to shoot him, police said.

The Taser was ineffective because of the suspect’s sweater, and he was able to escape into the cruiser, which was unlocked despite Rockland police regulations, the department’s chief said.

Now leading a chase, the robber struck a number of other police cruisers on a chase that went through Abington and Weymouth, but was stopped on the Burgin Parkway in Quincy, where the vehicle was surrounded by police from multiple agencies, authorities said.

The stolen cruiser stopped right off a highway ramp near a Home Depot but, about an hour later, maneuvered around a Massachusetts State Police armored vehicle, sped off down the parkway.

Police used tire-deflation devices to bring the SUV to a stop by a BJ’s Wholesale Club gas station about three-quarters of a mile down the parkway, where armored vehicles pinned it in place.

Negotiations resumed, but after some time the suspected robber allegedly opened the door with the police rifle in hand. That’s when an officer opened fire and shot the man.

Customers at the gas station were told to run by police, and some saw the incident unfold up close.

“The whole front of it was gone, completely smashed up, you know it wasn’t going to make it too far,” he said. Authorities “just T-boned him and that was it. … He couldn’t go anywhere at this point.”

The MBTA was asked to shut down the Red Line and commuter rail service in the immediate area and provided shuttle buses between Braintree and Wollaston during the incident.

Red Line and commuter rail service has since resumed.

The incident left at least one neighbor rattled.

The Route 3 northbound/southbound Exit 42 ramps to Burgin Parkway and Quincy Center were also closed due to temporary police activity.