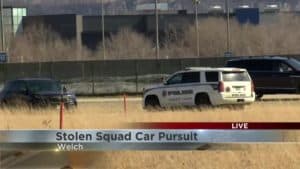 The Prairie Island Police Department said “the incident is under control and the individual who stole the squad car is in custody.”

The investigation is underway and police said they may have more information later on Friday.

WELCH, Minn. (KTTC) — Multiple agencies are responding to an incident in Goodhue County after reports of a stolen squad car.

A witness at the scene said a man was brought into custody after a pursuit. Law enforcement has not confirmed details on the incident yet.

This is a developing story and will be updated.