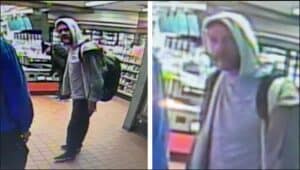 A Kentucky man is in custody after a crime spree that spanned multiple states – and took the life of an Illinois deputy.  He is also facing charges in Missouri.

Around 5 a.m. Wednesday, Wayne County, Illinois Sheriff’s Deputy Sean Riley was responding to a motorist assist call on Interstate 64 near the Indiana border when he was shot. As another officer pulled up to the scene, Riley was found dead, and his squad car was missing. The squad car was later found abandoned on I-64 nearby, the Wayne County Sheriff’s Office said.

Officials with the Illinois State Police said the suspect, Ray Tate of Kentucky, then carjacked a semi-trailer near where the deputy’s car was left. Police said the driver of the trailer was held against his will and was forced to drive Tate to a gas station in St. Peters, Missouri.

St. Peters police confirmed a shooting and carjacking happened at the QuikTrip on Main Street around 7 a.m. Tate drove away from the gas station after shooting another man while stealing his car. The shooting victim was taken to the hospital in stable condition. Tuesday, Tate was charged with 14 counts by St. Charles County prosecutors. Federal charges may also be coming.

“Due to this being an active investigation there is a limited amount of information we are going to release right now but I will say that there was evidence at QuikTrip that is directly related to the crimes that happened in Illinois,” explained St. Peters Officer Melissa Doss.

The stolen vehicle was later found in O’Fallon, Missouri off Highway 70, according to police. The suspect was believed to be near Highland, Illinois at one point. Illinois State Police said Tate then went back into Illinois with a kidnapped victim in another stolen car. That car was found near a home in rural Carlyle, Illinois on Beaver Road around 1 p.m.

Police said Tate then committed a home invasion and took the kidnapped victim and the homeowner hostages inside a Carlyle home. ISP and SWAT offices were able to get inside the house just after 1:40 p.m. and arrested Tate without further incidents. The homeowner and the other victim were not injured.

The Wayne County State’s Attorney is charging Tate with first-degree murder. St. Charles authorities say 11 of the 14 counts against Tate in their county could result in life in prison.

Indiana State Police and Illinois State Police confirmed Tate is the suspect wanted in the crime spree. Tate, 40, was also wanted for a shooting investigation in Indiana that took place on Dec. 16. In that incident, Tate allegedly fired a shot during an attempted carjacking. No one was injured in that incident.

Tate is expected to make an appearance in court on Jan. 25