3/1/21 Newark, NJ – Newark Patrol Unit Stolen And Found Later Up On Blocks – Stripped Of Wheels And Seats Behind Football Stadium 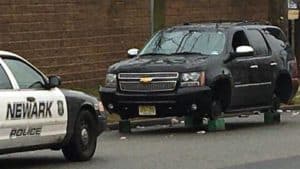 Police in Newark recovered one of their patrol unit that was stolen from a location in the city during the overnight hours.

According to authorities, after issuing a be on the lookout to surrounding towns for a black 2012 Chevy Tahoe with reported NJ license plate numbers “U76-JTD”, police said. The truck was recovered stripped of its wheels right behind Shabazz Stadium Football Field ( 137 Hillside Avenue) around 9:45 a.m.

Thieves also stole the vehicle’s chairs -as well- before they fled the scene.

The incident remains under investigation.