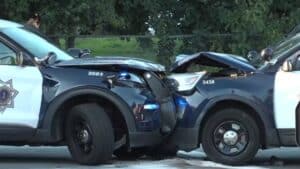 Police in San Jose arrested a man Monday after he allegedly fought with a security guard at a hospital and stole a patrol vehicle.

Around 2:30 p.m., officers responded to Regional Medical Center in East San Jose on reports of a patient who fought with security before leaving the hospital on foot.

An officer spotted the suspect in the area of El Rancho Verde and McKee Road, not far from the hospital. Police said the man lead the officer on a brief foot chase.

The suspect then entered the officer’s patrol vehicle and fled the scene, according to police. He then had a minor crash into a vehicle involving a community member before driving away.

Police said the suspect then crashed into a responding patrol unit head on, before being taken into custody.

The suspect was taken to a hospital for injuries during the arrest. Two responding officers and the community member suffered in the crash.

Police have not released the suspect’s name. According to officers, the suspect may have mental health issues.