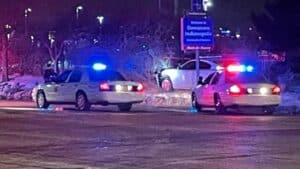 The suspect who allegedly stole the vehicle was taken into custody near McCarty Street and Madison Avenue, IMPD spokesman William Young said.

Night watch is currently at the scene, Young said.

An on-duty IMPD officer first made contact with the suspect while stopping to assist in a crash on Interstate 70 that person was involved in, Young said.

The suspect had previously attempted to take another person’s vehicle. When the officer stopped, the suspect jumped into their police car and took off.

A brief pursuit followed, and the suspect later crashed into an embankment at the intersection of Madison and McCarty.

The officer was uninjured and the suspect is believed to not be injured but was taken to a hospital to be checked out, Young said.