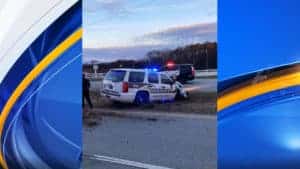 The Decatur Police Department has confirmed that an inmate had stolen a Winston County Sheriff’s Office cruiser Monday and crashed it into a light pole and another vehicle.

According to Decatur PD, the inmate stole the vehicle and crashed into a second vehicle then a light pole at the intersection of Cedar Lake and Hwy 31. The accident caused traffic lights to go out and the hit light pole will need to be replaced.

Charges are pending against the inmate from the WCSO and Decatur PD.