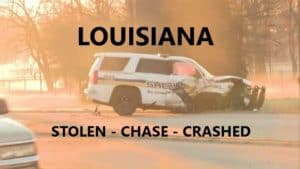 Authorities have recovered a stolen St. Charles Parish Sheriff’s Office patrol vehicle that led law enforcement officers on a three-parish chase Monday morning, but they are still looking for the possibly-handcuffed suspect who disappeared after eluding the police pursuit and ditching the cruiser in New Orleans.

The unidentified man managed to steal the marked, 2015 Ford Explorer after he had been handcuffed and put onto the backseat by a deputy responding to a report of drug use in St. Rose, according to Cpl. James Grimaldi, spokesman for the St. Charles Parish Sheriff’s Office.

The pursuit began just after 5 a.m. when the Sheriff’s Office received a report of a man possibly using heroin behind the Pilot service station, 10405 Airline Highway, St. Rose, Grimaldi said.

The unidentified suspect crashed into a ditch while trying to drive away as the deputy arrived. The deputy took the man into custody and put him, handcuffed, into the patrol unit, Grimaldi said.

But as the deputy was conducting his investigation into the ditch crash, he turned to see his patrol vehicle driving away, authorities said.

The stolen SUV headed east on Airline Highway into Jefferson Parish where a pursuing deputy was involved in a two-car crash at David Drive, according to Grimaldi. State Police troopers are investigating that accident, according to Trooper Monroe Dillon, spokesman for the the agency.

The suspect drove on, making his way into New Orleans. The deputies lost sight of the stolen SUV near Xavier University, Grimaldi said.

Police recovered the stolen patrol unit about 8 a.m. in the 700 block of Toledano Street in New Orleans. The suspect remains at large.

The man is described as being in his late 20s to early 30s. He is about 5 feet 9 inches tall and weights 110 pounds. The man has possibly-brown hair cut about his ears and a thin mustache.