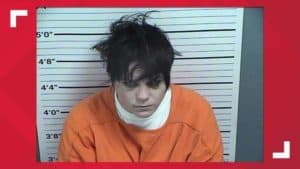 A St. Charles woman is behind bars after police said she stole a police car and committed several other crimes.

According to court documents, on February 20 around 6:15 p.m., police pulled over a black Nissan Sentra going over the speed limit while driving westbound on Interstate 70.

Nesler was the passenger in the vehicle. Since both the driver and Nesler were not wearing seat belts, an officer asked for identification.

Nesler was then arrested but soon after asked for her handcuffs to be adjusted due to it causing wrist pain and for her purse to be retrieved from the Nissan she was previously in.

The officer adjusted the handcuffs first, then went over to get Nesler’s purse. That’s when Nesler slipped out of her right handcuff and drove away in the officer’s patrol vehicle.

A St. Charles County Deputy later found her in a trash can a block away at 727 Cordes Street in O’Fallon.

Nesler was again placed under arrest.